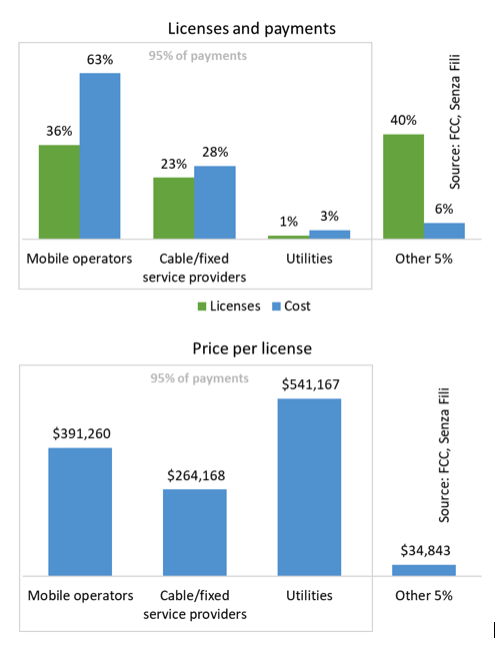 The Citizens Broadband Radio Service (CBRS) auction for Priority Access Licenses (PALs) in the 3.5 GHz spectrum that the FCC closed in August 2020 was no ordinary auction for mid-spectrum. The license holders have to share the spectrum with incumbent users and also opportunistically use at least 80 MHz of spectrum on an unlicensed basis, using General Authorized Access (GAA).

Sharing spectrum with incumbents will not have a significant impact because the incumbent use of the band is extremely limited. Still, the ability to use the rest of the band on an opportunistic basis (i.e., when available) can be quite valuable. The 10 MHz of a PAL gives the network operator a reliable foundation – an anchor – to deploy CBRS and protect the investment, and the GAA is a free add-on. Everybody can use GAA, but GAA users will not have the dedicated CBRS access that a PAL guarantees in a public area.

The price paid for the licenses is in line with expectations for mid-band spectrum ($0.22 MHz/pop), despite the expectation that more licensed mid-band spectrum will be available by the end of 2020 in the US. It looks like the shared-spectrum and mixed-use model that accommodates both incumbents and unlicensed users, along with licensed users, did not scare the bidders. That is good news for the prospects of shared spectrum beyond CBRS.

Who got the licenses?

More than for the price paid, the auction was a testing ground for new spectrum dynamics and private networks’ potential. In addition to the usual suspects – mobile operators – PAL winners in Auction 105 included utilities, educational institutions, enterprises, and cities. Their bidding strategy and focus varied across players, and the value of the spectrum varied accordingly.

As expected, mobile operators were the bidders with the deeper pockets. They contributed to 63 percent of the proceeds, but only got 36 percent of the licenses. This checks out; they mostly targeted areas where they needed either coverage or capacity.

Verizon’s focus was on capacity in areas with high subscriber density and limited spectrum allocations. In those areas, Verizon was willing to pay high prices ($0.39 MHz/pop) and tried to get as many licenses as possible (3.6 per county on average, with 4 PALs maximum per bidder). As a result, Verizon accounted for 41 percent of the proceeds but only 3 percent of the licenses. It is a sound strategy. It will be interesting to see if Verizon will go beyond the counties where it has PALs and use GAA there to build private networks in partnership with enterprises and venue owners.

Dish strategy was diametrically opposite. It went for less expensive licenses ($166K compared to the $3.4 million paid by Verizon), spread out across a wider footprint (27 percent of the licenses, on average 1.76 licenses per county). While this is in line with a strategy that so far has focused more on spectrum accumulation than on network deployment, it is not clear what Dish will do with a thin PAL footprint (it has licenses in 57 percent of counties). It may become a useful complementary asset for its planned 5G network, possibly to support private networks or wholesale services for IoT applications that require wide-area coverage (e.g., fleet management). This would be a very innovative use of spectrum that is well suited to CBRS and relies on a challenging business model.

Cable and fixed service providers: A new way to share?

Cable operators and broadband providers have followed a middle-of-the-road strategy, with a narrow focus on location while keeping an eye on price, suggesting that they see CBRS as a nice-to-have asset, but not crucial to their wireless plans. It will be interesting to see whether they may be joining forces and share a nationwide network, following the same path they took to share their Wi-Fi hotspots. Again, with the combination of PAL and GAA, CBRS is a band that encourages new ways to use and share spectrum resources.

The bidders with the most outstanding innovation potential and the strongest commitment to CBRS are utilities. They paid top dollar for the licenses – over $451K – and had a razor-thin focus on location, presumably where they operate. Within these locations, they did not go for depth (1.3-1.5 licenses per county). Utilities have been looking to have a network that can deliver good coverage and support for mobility where they operate to support their facilities and equipment and their employees. They do not need massive capacity, but they want to control their network and need reliability and security. PAL licenses are likely worth more to utilities than to other bidders because CBRS gives them the ability to get the network they need. And they may be able to share it with other utilities that operate in the same area and have similar performance requirements, but with which they do not compete. GAA access will also be a useful complement in locations where their capacity needs exceed the PAL allocation.

Somewhat surprisingly, tower companies and neutral hosts stayed out of the auction. They could have gathered a footprint to provide PAL access to their customers through the secondary market (i.e., leasing PAL access for specific venues) or other arrangements.

Who needs a PAL?

The notable absentees point to the realization that a PAL isn’t necessary for most private networks for two reasons. About half of the CBRS band is reserved for unlicensed GAA access, which is readily available to enterprises and other venue owners. Enterprises and venue owners have reasonable control over CBRS spectrum use within the real estate they control, and in many cases, this provides adequate protection for their investment in CBRS.

With the combination of PAL and GAA, everybody wins and can chart a different path. And there is much to learn from how successful these paths will be.