Low-band, mid-band or high-band — Why spectrum bands matter in a 5G world 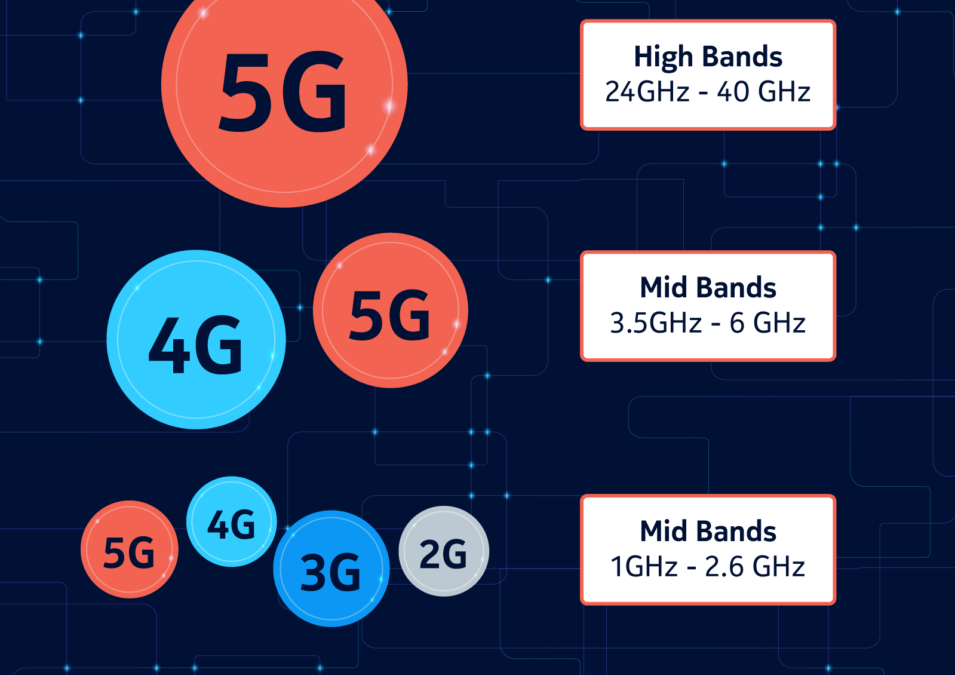 5G presents some new challenges for wireless operators. On one hand 5G networks are intended to support faster mobile broadband speeds and lower latencies making new applications possible like on-demand video and autonomous vehicles. On the other hand, 5G will require wireless operators to have access to large amounts of spectrum to make these new services a reality.

The GSMA, a global trade organization that represents mobile operators, recommends that regulators and government agencies that control 5G spectrum allocation make 80-100 MHz of contiguous spectrum available per operator in prime 5G bands and about 1 GHz of spectrum per operator available in millimeter wave bands.

But spectrum is a scarce resource and that means that wireless operators around the world are most likely going to have to use a mix of low-band, mid-band, and high-band spectrum to deliver the type of 5G experience that their customers demand.

Low-band spectrum is any spectrum that is lower than 1 GHz on the spectrum chart. Early wireless networks, often referred to as analog cellular, were deployed in low-band 800 MHz spectrum.

At the time operators often referred to low-band spectrum as “beachfront property” because it was so desirable. Wireless carriers could serve thousands of customers within hundreds of square miles with just one tower.

In a 5G world, low-band spectrum will make it possible for operators to provide a wide-swath of coverage but it also means that the speed and latency of the 5G network will probably only be incrementally better than what is delivered with 4G networks. Much of the 5G network’s performance will depend upon your proximity to the cell site. However, low-band spectrum does make it easier for the wireless signal to penetrate windows and walls.

In December T-Mobile launched 5G service in the 600 MHz spectrum band. The company said its network is available nationwide and covers approximately 200 million people. T-Mobile also plans to supplement its low-band 5G coverage with service in the millimeter wave band.

AT&T also has deployed 5G in about 20 cities using low-band spectrum in the 850 MHz band, according to FierceWireless.

AT&T says its low-band 5G network provides broad coverage and the company is offering it to consumers. However, AT&T also has a high-band 5G offering, which it’s calling 5G+. This is deployed in the company’s 36 GHz band millimeter wave spectrum and it offers extra speed and capacity and is intended for high-traffic areas like campuses and arenas. AT&T’s 5G+ is available in parts of 23 cities and the company is making it available to only enterprises.

Spectrum in the 1 GHz – 6 GHz range is mid-band spectrum and it is considered ideal for 5G because it can carry plenty of data while also traveling significant distances. The GSMA describes spectrum in the 3.3 GHz to 3.8 GHz range as particularly appealing. The organization  explained in a recent white paper that this spectrum is ideal because many countries around the world have already designated it for 5G.

Besides Sprint, some U.S. operators are also planning to refarm (or re-use) some mid-band spectrum (such as the 1800 MHz) that is currently being used for 3G services and use it for 5G.

The third bucket of spectrum where wireless operators are deploying 5G is in the millimeter wave spectrum. This is very high on the spectrum chart in the 24 GHz band and higher. The GSMA recommends that operators support millimeter wave spectrum in the 26 GHz, 40 GHz, 50 GHz and 66 GHz bands for mobile services. However, the association also notes that spectrum in the 26 GHz and 28 GHz already have strong momentum from operators and added that these bands are adjacent and therefore make it easier for handsets to support.

Millimeter wave spectrum is limited because signals can’t travel very far — in some cases the signal will travel less than a mile — and they are also susceptible to interference from things like trees and buildings and even glass.

But the benefit of millimeter wave spectrum is that if the signal is unencumbered users can get connection speeds between 1 Gbps to 3 Gbps or even higher.

Besides its low-band 5G offering, AT&T also has a high-band 5G, which it’s calling 5G+. This is deployed in the company’s 36 GHz band millimeter wave spectrum and it offers extra speed and capacity and is intended for high-traffic areas like campuses and arenas. AT&T’s 5G+ is available in parts of 23 cities and the company is making it available to only enterprises.

Likewise, T-Mobile also has deployed 5G in six markets using millimeter wave that supplements its 600 MHz 5G network. The company has said it is using 39 GHz spectrum in its Las Vegas market and 28 GHz spectrum in the other five markets.

Meanwhile Verizon is currently only offering 5G using millimeter wave spectrum. The company deployed its 5G service in 31 cities so far and is also using spectrum in the 28 GHz and 39 GHz bands. In earnings calls with investors, Verizon executives have said that millimeter wave spectrum works better than many experts thought and the company is using beam-forming technology coupled with 5G small cells to get more coverage.

More spectrum will be coming to the U.S. in 2020. The Federal Communications Commission (FCC) just concluded the clock phase of its 5G millimeter wave (mmWave)  spectrum auction. Auction 103 auctioned licenses in the 37 GHz, 39 GHz and 47 GHz frequency bands and raised more than $7.56 billion. The winning bidders have not yet been revealed.

Besides  Auction 103, the FCC plans to hold a public auction of 70MHz of the 3.5 GHz CBRS spectrum in starting June 25.

Although these two auctions are a step in the right direction, U.S. operators say it’s not enough because the CBRS auction is only for 70MHz of spectrum and auction rules forbid any single entity from purchasing more than 40MHz of that spectrum in any license area. That limits how much any one U.S. operator will be able to win.

According to Alex Besen, founder of Besen Group, a consulting firm that specializes in private wireless networks, he believes that the CBRS auction will attract mobile operator bidders that are looking for spectrum to add additional network capacity in dense urban areas. However, he also expects to see non-traditional bidders such as oil and gas firms, manufacturing companies and other types of enterprises. “I think that the CBRS auction offers enterprises a unique opportunity to launch mobile connectivity services without relying on mobile operators,” Besen said, noting that these companies will be able to purchase spectrum licenses and set up their own private wireless networks.

However, it is likely that more mid-band spectrum is on the way. The FCC has proposed a plan to auction 280 MHz of C-band spectrum (spectrum between the 3.7 GHz and 4.2 GHz bands) in December 2020. The spectrum is currently being used by satellite providers to deliver video programming to cable firms.

In a letter to Roger Wicker, chairman of the Senate Committee on Commerce, Science, and Transportation, FCC Chairman Ajit Pai said that the FCC will hold a public auction of this spectrum while preserving the upper 200 MHz of the C-band for video programming.

But Besen believes that it is optimistic to believe that the C-band auction Pai is proposing will actually occur in 2020.  “I think it will be delayed. The FCC won’t be able to finalize the rules and regulations for the C-Band so quickly after the CBRS auction,” he said. Plus, he noted that there is a U.S. Presidential Election in November that may also cause delays.

Other countries are also planning to conduct 5G spectrum auctions. In the U.K., regulator Ofcom plans to auction 80MHz of spectrum in the 700 MHz band  and 120MHz in the 3.6-3.8 GHz band for 5G in the spring. In addition, the French government is expected to hold a 5G spectrum auction in March, which is about three months later than originally expected due to disagreements between the French finance ministry and the telecommunications regulator Arcep over the amount of 5G spectrum to be auctioned and the amount of money to be raised, according to a Reuters report.

Spectrum will play a key role in the type of 5G service that operators will be able to provide to their customers. High-band spectrum may give you blazing fast speeds and lots of capacity —but only if you are close to the cell site. Low-band may provide excellent coverage but the network performance may only be a small step up from 4G.

One thing you can count on in the coming years is that operators will continue to fine-tune their 5G networks by expanding existing coverage, making additional spectrum purchases, and taking advantage of new technologies. Spectrum may be a finite resource but innovation is not.