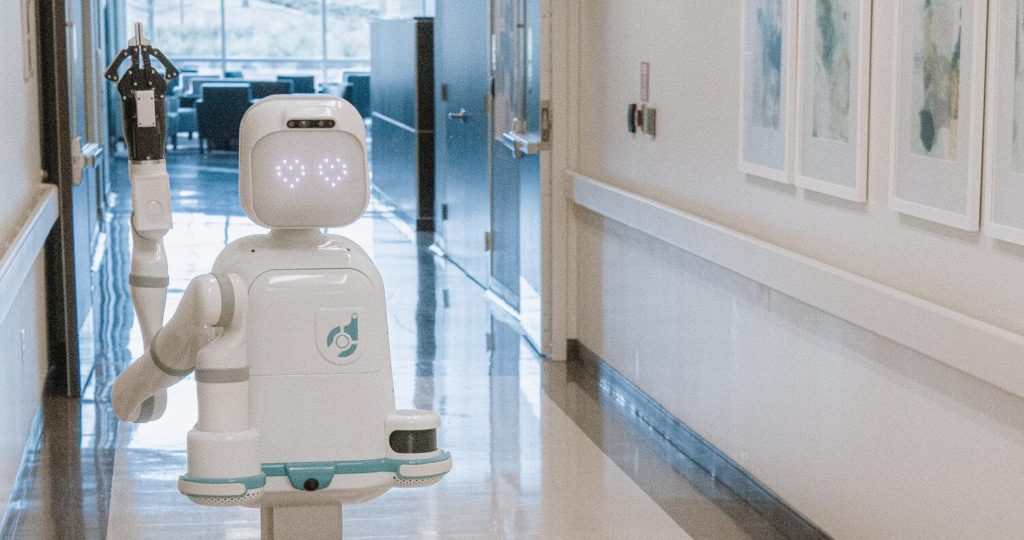 In the 2013 film Pacific Rim, humanity faces an apocalyptic scenario in which an inter-dimensional rift in the Pacific Ocean unleashes gigantic ‘Kaiju’ monsters that are hellbent on destruction. In response, they build massive mech warriors called Jaegers to fight the monsters with projectile weaponry, piston-powered punches, and high-energy laser beams.

In the real world of 2020, humanity faces a somewhat less gruesome, yet still menacing global threat posed by the novel coronavirus. To fight COVID-19, we aren’t building sci-fi mech warriors, but we are calling upon robots to disinfect hospitals and other public areas.

While other areas of the economy stagnate, robotics companies targeting the healthcare sector are seeing demand spike. Robots are cleaning hospital rooms using powerful ultraviolet ray busts and ozone clouds to kill the virus where it lies. Hospital staff that are already at risk of infection are protected as the automated robots either handle the tasks themselves, or are aided by new remote control solutions. In other cases, robots are being employed to ramp up production of much-needed personal protective equipment or assist in screening for COVID-19.

As robotics manufacturers and related services firms rally to the fight against the global pandemic, there’s a chance that the world might shift its perception of robots as job-takers to that of a necessary ally.

“We hope that this makes people realize that technology can help people,” says Jeff Burnstein, president of the Association for Advancing Automation (A3). “People could look at this and say ‘I see why we need these technologies to help us.’”

The Ann Arbour, Michigan-based A3 is an industry association that claims to represent more than 1,250 firms dedicated to automation technology. In a blog post, it recently detailed the many ways that automation is taking to the front lines of the battle against coronavirus in healthcare settings and beyond:

“Surprisingly, business is pretty good,” Burnstein says, “There’s all kinds of potential here for more applications to get traction.”

Disinfecting surfaces that could host a vector for coronavirus transmission are at top of mind. Especially in the cruise ship industry, after tales of quarantined guests and ships stuck at sea circulated the media. Another Danish robotics firm, SteriSafe, is in talks with cruise ship industries through a reseller. Its robot combines water and electricity to create ozone, filling a room with the gas to kill microorganisms, then reversing the process to leave the room habitable. Hospital staff can control the process with a tablet and receive disinfection reports.

Robotics startups are even attracting venture capital at a time when most investors are on pause. A TechCrunch story details how Diligent Robotics, which offers Moxi, a helper droid to run errands for nurses with fully-automated mobility and a flexible arm with gripper hand, announced a $10 million Series A in March.

In Info-Tech’s Tech Trend 2020 report, we detailed how automated robots still aren’t quite ready to tackle the less structured environments outside of a factory setting on their own. That’s where the technology of cloud-assisted robot fleet management comes in. As hospitals and other settings that don’t typically include robots in their operations come to rely on the steel automatons, they’ll need help from robotic solution providers. And more often, rather than send a robot engineer on a field trip to resolve problems, they’re connecting with a robot observability platform to handle the task remotely.

Formant, a firm we covered in a case study in our report, began offering its platform for free to any organization working to fight the pandemic on March 15. It hopes that it’s robot teleoperation solution can help keep employees safe. Its software helps facilitate social distancing with capabilities such as:

“Robots are suddenly no longer seen as a threat,” says Chris Dima, head of product marketing at Formant. “In a month it’s gone from ‘Robots are going to take our jobs‘ to ‘Robots can save us.’”

The free offering has spurred conversations with several different robotics companies and the onboarding work is being orchestrated, he says. “It’s not like switching from Google Hangouts to Slack here.”

Though Dima stresses that for the end customer (hospitals, in this scenario), the acquisition of robot helpers is seen as a non-technical one. If the robots can’t offer 95 percent help or better, then it would be a drain on valuable resources for the staff.

Another robot observability firm, Auckland-based Rocos, offered its platform for free to organizations in need on March 20. In a blog post, the company says it is responding to an increase in demand for healthcare robotics.

Hospitals in China are even combining remote robots to perform medical procedures facilitated by the connection of a 5G network, according to a report in China.org. Zhejiang Provincial People’s Hospital collaborated with China Telecom to allow doctors to perform an ultrasound on a patient with COVID-19 and located 700 km away in Wuhan.

The hospitals are issuing “remote ultrasonic certificates” for the first time after building a robotics communication system on 5G networks. The scans generate gigabytes of data over just a few minutes and require low latency so the doctors conducting the scans can interpret the visuals and communicate effectively with the patient.

China is also deploying 5G-enabled robots at airports and shopping malls in major cities such as Shanghai and Guangzhou to monitor body temperature and mask-wearing.  Developed by Guangzhou Gosuncn Robot Company, the self-driving robots are equipped with high-resolution cameras and infrared thermometers so alerts and data can be captured and shared with law enforcement.

Impact of COVID-19 on the symbiotic robots trend

The Tech Trend 2020 report highlights how robots working alongside humans in the workplace results in the best-case scenario, where you get the tireless repetition and consistency of robotic automation paired with intuitive human judgment. The outcome is better than having either only humans or only robots at work. By having a human in the loop, there is a better return on investment.

While some traditional areas of automation may be on pause as economies stall during country-wide lockdown efforts, the pandemic is now spurring the use of robots into new scenarios and environments. Solutions to operate robotic fleets at scale by enabling human operators are getting an accelerated uptake as a result.

In the weeks ahead, hospitals will go to war against the coronavirus alongside robot allies. Eventually, we will defeat the pandemic and the last coronavirus will be zapped away by a UV light or suffocated in an ozone cloud. After that enemy is vanquished, robots will remain to help face the new world.