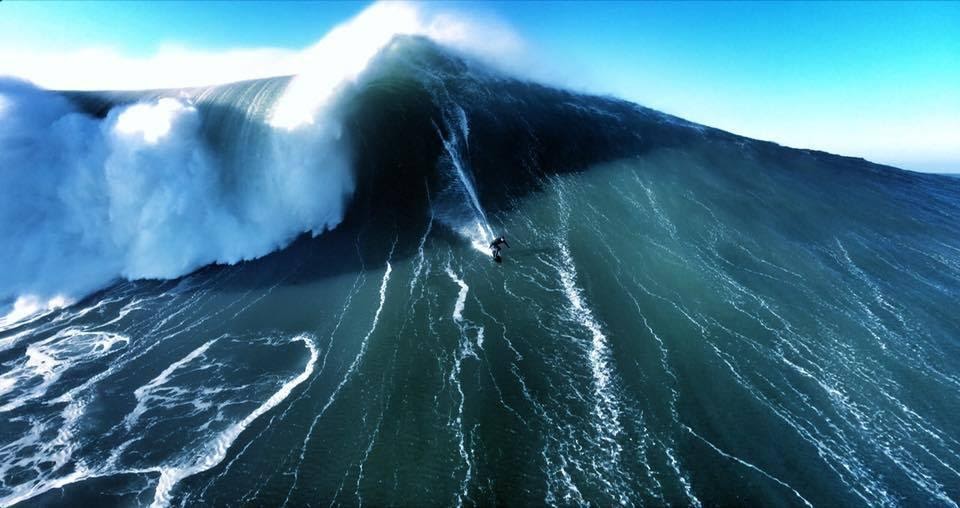 On November 8, 2017, Rodrigo Koxa was towed into an eighty foot wave. He was up on his board within seconds of his release, gliding in front of an avalanche of water. That day he set a record for the biggest wave ever surfed. The very same day another surfer was pulled out the same water with a broken back, lucky to be alive.

Surfing big waves is not for the faint of heart. It takes extraordinary skill, luck and timing to stay in front of a force strong enough to kill you. As Koxa shows us, the rewards for learning how to harness the incredible momentum are huge.

In the next decade, our telecom market has the potential to be like the 80-foot wave Koxa rode. It is starting to swell in the distance. Those brave enough to take the ride will feel its force. The question for them is how to get on top and remain in front of the powerful white water.

Marcus Weldon, President of Nokia Bell Labs, is becoming an expert on waves. Not the Koxa kind, the economic and technical kind. Lately, he’s been advising telecom companies on how to prepare for the next big ride.

Weldon’s work centers on an economic phenomenon called Kondratiev waves or, aptly, “super surges,” consisting of alternating intervals of high sectoral growth and intervals of relatively slow growth that last about 40-60 years.  These waves, caused by technology, are known to most of us as industrial revolutions. They are so big that they change economic and social structures.

The last wave started in 1971 and created our telecom industry. Over the last forty years, the Information Communications and Technology (ICT) industry has experienced a few spending waves. We saw companies rise and fall, valuations shift, and stock valuations change. But how much value was created? The cynic in me says not much. Most companies just rode a wave up and down – without control. They were moved by the force of the market.

There are some extraordinary companies like Apple and Amazon that took a completely different ride. They redefined their markets and created a tsunami of success. According to Nokia Bell Labs models, we have an opportunity to redefine the telecom market and take a giant run on the fourth industrial automation wave that is just beginning. If we do it well, the ride could last until 2035.

The new value chain:  what’s next?

The future of humanity is going to be based on a big technology shift – a “wave” that crashes down on the existing value chains in the market and changes everything.

We’ve watched a technical progression from mainframes to the Internet to feature phones to smartphones. If you look back at the beginning of all information technology – the Unix and large supercomputing era – the value stack was dominated by hardware and its operating system (OS). The environment was complex, the architecture was distributed, and there wasn’t really a human-machine interface.

Then we had an enterprise-driven shift because we wanted more productivity out of office workers, so we put computers in offices and eventually in our homes. We saw human-machine interfaces increase in importance.

Then we moved into feature phones and from fixed to wireless. Telecom seemed to be the future because it seemed to be an innovation. But what everyone missed, is that it wasn’t enough of an innovation. The next wave was stronger because it combined the network, computing power and the mobile phone. This combination created the first mobile computer, and Steve Jobs saw the value of having a mobile computer that works anywhere using the power of the infrastructure that had been built.

What will happen to this smartphone that dominates our existence? Here’s a shocking thought: the smartphone has reached its end. If the future is about augmenting humans, we’ll need to look beyond the device. The solution is to have augmented intelligent things embedded in or on us. It might be a headset or an earpiece, or clothes that control your body temperature. It doesn’t really matter what it is because its attributes are the most important.

Augmented things will have a very intuitive human-machine interface with very simple hardware. They will have a sensor and a radio because they need context. The only task they do is collect and send information over a network infrastructure to an intelligent system that interprets it and sends the context back to you. That’s what augmented reality is.

Data for AR cannot be stored locally, because you’d have to know everything about everything to provide the right context. So, by definition, AR has to be delivered from the cloud. The device is just input/output. That likely means the OS and apps as we know them today will go away. The OS will move into the cloud and become an orchestrated AI system. You won’t care where the apps are as long as they solve the problem you need to solve.

That is a very different value-stack from the one we have today. You see some companies that have pieces of the new value stack. These are the companies that have a network infrastructure, are good at the cloud, and have strong AI systems. The ones that will do best in this wave will innovate for enterprise productivity because this shift will be an enterprise shift, not a consumer shift.

This enterprise shift will be the wave that combines elements in the value stack that will make the industrial internet of things possible. It could add another trillion on top of an already trillion-dollar ICT industry.

The five value-driving combinations of the next industrial revolution

So what does ICT need to do if they want to ride this massive wave with control instead of being ridden by the wave?  According to Weldon, they need to invest in five value-generating technology combinations.

1Getting the most value out of the end to end network
Instead of building networks for humans whose senses are capable of processing information at ~100 milliseconds latency, we need to build for adaptive manufacturing where some systems require less than 1 millisecond of latency.  The network must also support more devices, and bytes of data, at closer proximity.

Network reliability will also need to improve. The best wireless network in the world is about 99.8 percent reliable. The problem is industrial automation requires six 9s. That’s nowhere near what a carrier network can do. But, here’s the good news. 5G has been designed to do that – in wide and local area networks, or WAN and LAN, respectively.

The challenge will be integrating the mission-critical private networks, fixed and wireless access, and transport and core elements of the network and ensure they perform to industrial standards and scale.

2Automated intelligent slicing
For industrial applications, the network must have end-to-end coordination. Communication service providers (CSPs) will need to slice the network 10,000 times, maybe even 100,000 times in thousands of different ways. To be anywhere close to productive, providers will need to automate their service and network orchestration to dish up slices, track Service Level Agreements, and bill for them.

Each slice of the network will need to go from one end of the value stack to a set of applications, including analytics and security, all the way back down to the other end – and will need to be dynamically managed. This will need to happen second by second, hour by hour — 10,000 times. This must be done end-to-end because you can’t have multiple systems trying to negotiate that in real-time.

Industrial automation will require performance at an industrial scale with ultra-low latency. The only way to get low latency is to get closer, so dynamic distribution is critical. You need to dynamically distribute workloads, and run those workloads on any cloud. For that, you need hardware and software – all managed as part of a cloud infrastructure that’s end-to-end and highly optimized.

4End-to-end security
CSPs use several security tools; however, with the growing number of IoT devices, and the unique and diverse business requirements of industrial automation, CSPs will need to approach security in a more orchestrated way. They will need to collect data from billions of sources and respond to an increasing number of security events. This requires a more sophisticated – and automated approach to security.

Enterprises will need to secure devices of unknown origin, with unknown upgrade paths that have never been verified by anyone. With industrial automation, security will need to be sentient to protect the network from the access to the core and all the information that resides in the cloud. Again, the only way to do that is end-to-end.

5 Industrial automation platform
More enterprises will build their own private wireless networks to support their industrial IoT applications. These networks will need to be mission-critical, support the same performance standards we expect over the WAN and be interworked with WAN slices. The change here is the LAN will increase in value and be an area of investment.

According to ABI Research, the market for private wireless networks will reach $16.3 billion USD by 2025. But that’s not all. The power of the industrial automation platform is about the combination of technologies and partnerships. This is where we’ll see investment in more industry-specific services and a drive for openness to allow developers to create a whole set of innovations.

Weldon thinks many of those services will place the value on being able to couple the physical world with the digital world – and leave room for the biological piece. That kind of combination opens the door to the mirror world – where people and things interact live and are augmented as one, creating higher-order productivity and human-machine harmony.

The quest for a new wave of productivity is leading us to a unique moment in technology.  This big wave, like other Kondratiev waves, will force us all to think about new ways of working, new possibilities and new value chains. The good news for ICT is that this wave relies heavily on a strong combination of technologies that are tightly integrated and orchestrated. We can approach this wave slowly and cautiously and be overpowered by its force, or we can use a powerful jet ski to get us into a position where we can ride this mammoth wave like the best surfers at Nazare.